Two orphans, Amara (11), a servant, and Tadpole (8), a reluctant and hunted royal, escape and find their way through the Gallic countryside to Britannia.

It’s a classic story, fun to write. So I wrote the whole thing, some 40 plus chapters, rewrote the first 12, sent it to Elaine the Reader, got it back, rewrote those chapters, then the next 12, and then stopped. That’s where I am now after several weeks (could it be six or more?) of realizing the kids got off too easily.

Real children don’t have it easy. Last week, three of my grandchildren came to live with me while their parents took a work vacation. Children argue, fight, like each other, joke around, tease, and get hurt. They try out independence. Jon (barely 9) reveled in riding his bike all around the far reaches of our desert acreage, forbidden territory until now for him. They cheat, too. Indoor hide-and-seek became a lesson in peeking, faking the count, changing hiding places, and helping the seeker when you weren’t supposed to.

They also made characters out of plastic clay and we took pictures. 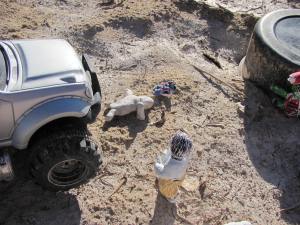 The children were not doubtful about the one that lost a leg and then an arm. “He fell down the cliff!” “He got run over!” These little guys (aliens of some sort) had a rough time in the desert but finally found a place to rest.

An author is the god of his/her world, decreeing choices and plot. If the characters are to have a chance of becoming real to the readers (and hopefully there are some), their lives have to follow a pattern that fits them. Often the author is surprised by their choices, but allows them their independence. If the plot and characters have been reasonably set up, then the surprises will strengthen the story and make it more believable.

During the six weeks of not writing, I came to realize I’d let my two orphans off too easily. I’m a protective mother and grandmother. I love Amara and Tadpole. Why would I put them in real danger? What would they do out there in the woods if one of them was badly injured or sick? How could I do that to them?
If they didn’t encounter real danger, there would be no reason to write about them, would there? Why read a fictional travelogue? To be meaningful and perhaps even memorable, they had to have conflict, work to resolve it, and emerge changed for the better.

I’m ready for it. Just a couple of projects to finish up at home and then I’m back to four or more daily hours at the keyboard, drowning, eating wild poisonous berries, losing the boat, and being attacked by this and that.

I'm writing the second of two YA novels about the Roman empire just before Septimius Severus became emperor, and just after. My background is in theater. At UCLA and Univ. of Colorado, I studied Greek and Roman drama as well as Latin. That was awhile ago. My new research is even more fascinating, thanks to the Internet. I want to share the fun stuff! View all posts by Victoria Paulsen

One thought on “Playing God”